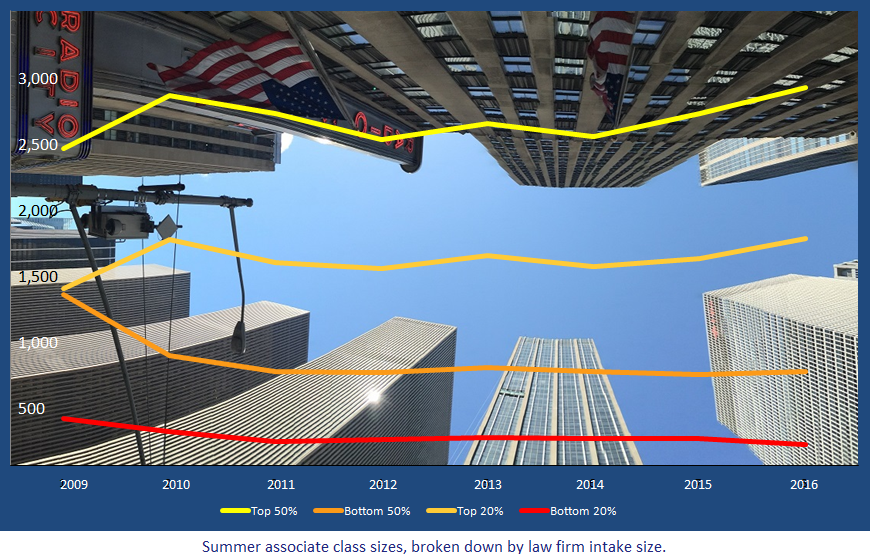 Steady market growth is the headline, but that's not the story for everyone in our 2016 hiring survey...

WOULD a smidge of optimism be reckless in the BigLaw hiring market? Probably. But we should allow ourselves a few seconds of joy before OCIs start in earnest. If our report this time last year pointed to steady growth, then this year’s is looking steadier yet. The 93 firms that reported data together grew their collective intake by 7% on 2015. Summer classes are up by the same figure, which contributed to a 73% increase since the gloom of 2010.

The elite just got elite-er

2016’s top ten recruiters grew by the highest margin – by 12%. This was down to five big hirers – Latham, Kirkland, Davis Polk, Ropes and Paul, Weiss – swallowing up 682 first years between them and together growing their intake by a whopping 30% on average. But for all except for Davis Polk, this uptick is more pronounced by these firms’ recovery from a year or two of lower hiring numbers. In the top ten as elsewhere, there are firms like Jones Day and Gibson Dunn hiring slightly fewer, though we’d put this down to the same cyclical movements.

This compounds a trend we picked up on last year: that the strong are getting stronger: while the top 30 enjoyed a 9% increase, the bottom 20 firms shrank their hiring by 21%.

The numbers in summer associate hiring paint this picture more vividly: trailblazers like Sidley Austin, with its flashy 77% increase to 188, have helped the largest 20 firms grow in summer hires by 10% this year. Meanwhile, growth below the top 20 loiters at a cautious 3.5%. And these firms are right to be cautious if you track their summer classes since 2009: the top 20 giants revel in their 88% growth since the recession’s doom year, while the middle 50% have scaled down their summers by 27% and the bottom third – the smallest summer classes – have got smaller by 64%.

For deeper analysis on market trends, have a read of our round-up of the year.

Class size changes at a glance – from the 93 firms supplying data:

Summers numbers – from the 79 firms that have given us data since we started in 2009:

The 2016 summers hiring survey in full>>

The salary survey
Starting with Cravath in early June, one by one the most competitive firms are raising their salaries. Keep up with the changes on this table throughout the summer.

The 2016 diversity survey
Check how your firms stack up on enthicity, LGBT and gender

Trends in the recruitment market
NALP's Jim Leipold and a few others spoke to us about the movements in the market and how to prepare for it.